Can you make a jetpack out of rifles? Egghead comic XKCD finds the answer. An AK’s recoil is actually greater relative to its weight than a Saturn V’s thrust. Soviet engineering, FTW. (If their rifles can do that, no wonder they’ve always had a lead in heavyweight boosters).

Well, the AK-47 can take off, but it clearly doesn’t have the thrust to spare to lift anything weighing much more than a squirrel. 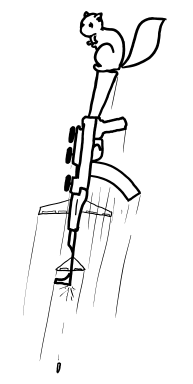 The problem comes when you get to the point where the rifle goes to fire Round 31, which it does not have. From there, gravity wins. But… what if you took a lot of AKs?