Two machine guns in battered condition on a Canadian war memorial are being examined and will be cosmetically restored to their original condition — and efforts are underway to determine their true provenance and history.

Both are German MG08 guns. The one in this picture, on the south side of a roadside cenotaph in Harold, Ontario, was captured in 1918 at Arras; the hole in its water jacket may have been caused by Canadian fire. The cenotaph itself is rare: most Canadian cenotaphs list only the war dead, but this lists the returned surviving veterans as well as the fallen. 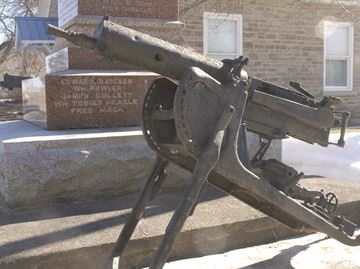 A pair of 100-year-old German guns, taken as souvenirs at the end of World War I, will be temporarily removed from the cenotaph on Highway 14 to be refurbished thanks to the efforts of the local branch of the Royal Canadian Legion and the Stirling-Rawdon Historical Society.

Silenced in 1918, the guns will never fire again says society member John Lowry, but they will be cleaned up and returned to their original colours, perhaps even solving a few mysteries along the way. Lowry explains that significant research has been done on the weapons, a pair of Maschinengewehr 08 machine guns captured by 2nd Division CEF troops at the end of the war, but there are many unanswered questions as well.

John Lowry and Phil Martin of the Historical Society will try to match the gun’s original color scheme — if they can determine what it is — and answer the question of what made the hole in the Arras gun. They’re also trying to find photographic evidence tying the gun’s partner to a particular location or battle. 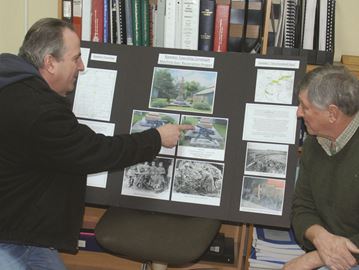 Lowry thinks the hole in the water jacket may have been the act of a Canadian sniper:

[T]he Arras weapon appears to have been disabled by a sniper’s shot and the restoration may lead to a conclusive answer, he adds, “if we find a .303 bullet in there.” Lowry says that the guns, capable of firing 500 rounds per minute, were water-cooled using a chamber that surrounded the barrel and marksmen would deliberately aim for it hoping to quickly overheat the weapon rendering it useless.

According to the article, trophies like this were once commonplace across Canada, but the herd — once numbering some 15,000 captured arms, originally intended to populate a grand war museum, but on the project’s cancellation scrapped or spread across the very large country — has been thinned, less by time than by WWII scrap drives.

[T]he remaining local pieces, which also include a trench mortar in Madoc and a field artillery piece in Trenton, are only a small fraction of the enemy weapons that ultimately arrived in Canada after World War I. …. A significant number, Lowry says, were scrapped during World War II, including a pair of machine guns received by the village of Stirling. The fate of a similar pair that arrived in Marmora is unknown, but they too may have been scrapped.

The Stirling Branch of the Royal Canadian Legion has raised the cost of the MG restoration. And no, they won’t be restored to firing condition — it is Canada up there, which is kind of like Massachusetts with more polite people and much better drivers.